The Mariani Family has owned the restaurant Checchino dal 1887 since it opened in 1887.

Francesco Mariani takes care of the front of the house while his brother  Elio is in the kitchen and their sister Marina handles the accounting. Considering the wine and the food, it is the best restaurant in Rome with over six hundred wines from Italy and all over the world.

The wine is stored in a cellar that was dug into Monte Testaccio, a hill made from broken amphorae, which dates back to Ancient Rome.

The slaughterhouses of Rome used to be located across the street and the restaurant still specializes in innards and other spare parts, which the Romans called the quinto quarto, or fifth quarter, which the poor people used to eat.

Michele and I first came here over 30 years ago and return every time we are in Rome, which is very often. There is an outdoor space but we prefer to sit inside.

Usually when we arrive, Francesco will make some wine suggestions for me, saying something like “I have the 1971 Fiorano, or the 1971 Torre Ercolana or the 1983 Colle Picchione, which one do you want.” 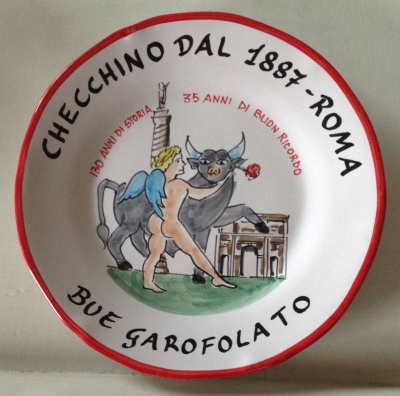 This time he proudly announced that the restaurant has a new plate Buon Ricordo plate in honor of the 130 anniversary of the restaurant and the 35 year anniversary of the Unione Ristoranti Del Buon Ricordo. Restaurants that are members of this collectors club give you a colorful souvenir plate if you order a certain traditional dish on the menu. Checchino’s new plate features Bue Garofolato, a beef pot roast cooked in a tomato sauce accented with cloves.

Michele then got up to look at the plate that was hanging on the wall and I knew what she was going to order it. 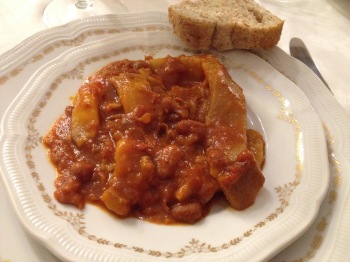 I started with the Assaggio di Fagioli e Cotiche, pig skin and borlotti beans cooked with tomato. This dish is so good, so intense, that I cannot resist!

Michele had the Artichoke alla Romana to start,

then the Pasta e Ceci, a thick chick pea and pasta soup flavored with rosemary.

Bucatini all’Amatriciana is my favorite pasta dish and as they say “nobody does it better”. I always order it here. 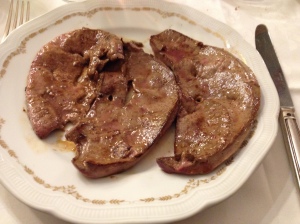 Fegato di vitello ai ferri,  thin slices of grilled veal liver, very flavorful and tender, was my main course and as a side dish I had an Artichoke alla Romana. 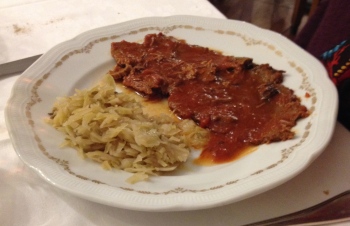 For the secondo Michele had the Bue Garofola, the piatti dell buon ricordo, served with cabbage braised with fennel seed.

We drank the 1971 Torre Ercolano and Francesco said it was the last bottle.

I finished with warm Apple Cake topped with Vanilla Gelato.

A week or so later, I invited Daniele Cernilli, aka “Doctor Wine,” author of The Ultimate Guide to Italian Wine 2017, and his wife Marina Thompson to lunch at Checchino. I have to go there at least twice when I am in Rome and found out it is one of Daniele’s favorite restaurants and that he has been going there since 1979–even longer than Michele and I. We had great lunch along with a bottle of 1983 Colle Picchione

Filed under Checchino dal 1887 - Dining like a Roman, Uncategorized