Wines from the Campo Alle Comete–Field of Dreams

It is always a pleasure to go to Il Gattopardo Restaurant.  Recently, I was invited there for lunch for a winery in Bolgheri in Tuscany, I  was happy to accept. 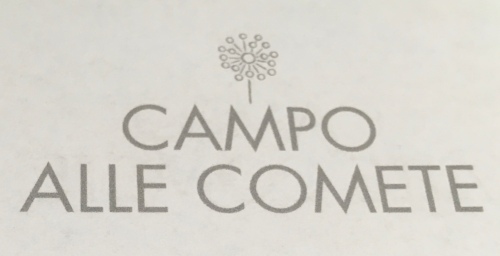 The Winery is the Campo Alle Comete- -Field of Dreams.  The speaker was Jeanette Servidio, Director and General Manager of the winery. 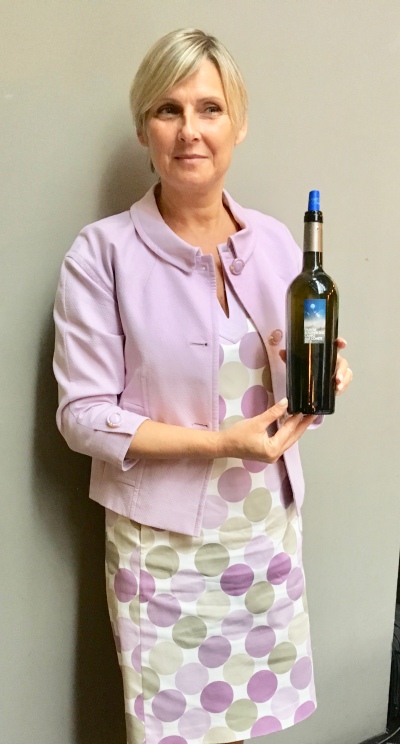 Feudi di San Gregorio, a Campagnia winery, acquired Tenuta Campo Alle Comete in February 2016.  The property consists of about 17 hectares and is located at the foot of the commune of Castagneto Carducci in the province of Livorno. There are 14.5 hectares of vineyards.

Jeanette described the soil as mostly loose sand with some clay and limestone. The land is level just a few meters above sea level. The oldest vineyard was planted in 1993 and the newest in 2007. Vine density ranges from 6,500 to 7,000 vines per hectare.

She said the winery practices sustainable farming and in 2016 started the conversion of the vineyards to organic.

The new wine cellar with its circular shape is inspired by an Etruscan tomb. It is partly underground which makes it naturally cool. There are 20 stainless steel tanks of different sizes and about 50 barriques/tonneaux in the cellar. 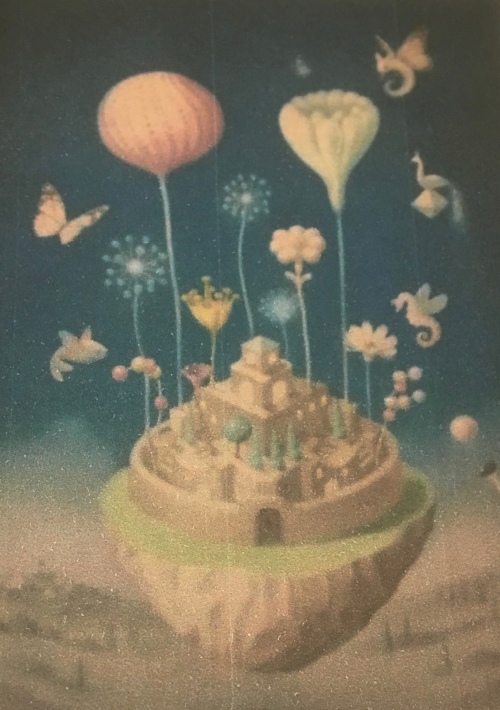 Nicoletta Ceccoli, an illustrator from San Marino, has designed the logo and also the dreamlike picture exhibited at the winery, from which the fairy images on the labels have been taken.

I was very pleased with how well the wines complemented the food! 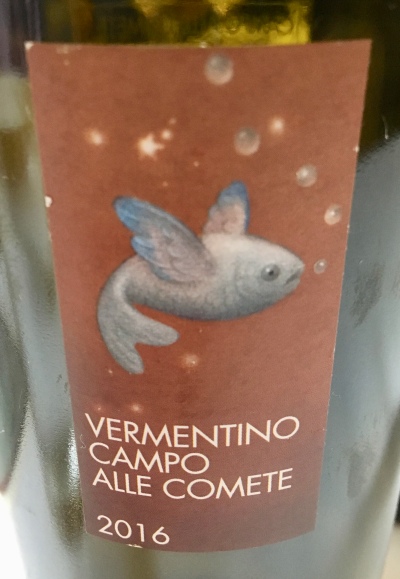 Vermentino IGT Toscana 2016 made from 100% Vermentino. Fermentation is in stainless steel vats at controlled temperature of 17 degrees C then a short time on the lees. The wine has citrus flavors and aromas with hits of herbs and good acidity. 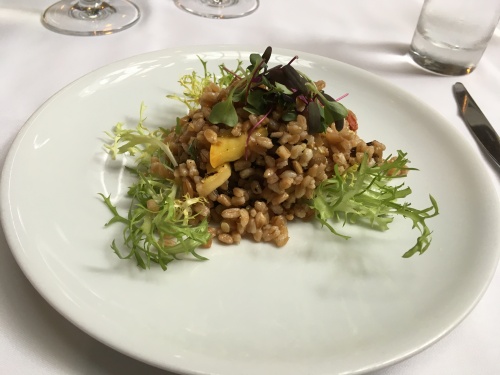 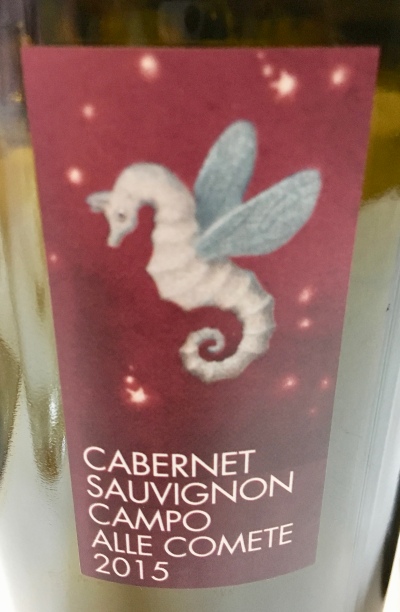 Cabernet Sauvignon IGT Toscana 2015 made from 100% Cabernet Sauvignon. Half of the wine is in stainless steel tanks to preserve the fruity notes; the rest matures for about 6 monts in new and used barriques and tonneaux of medium toasted French oak. The wine has aromas and flavors of red fruit with hits of black cherry and mint. 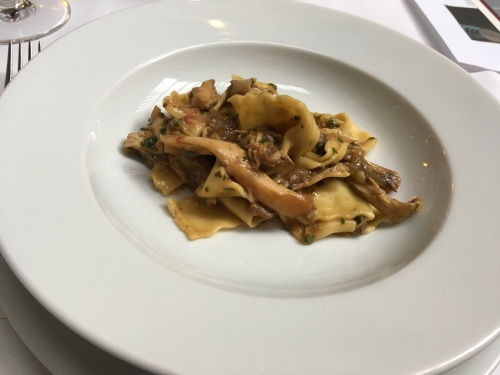 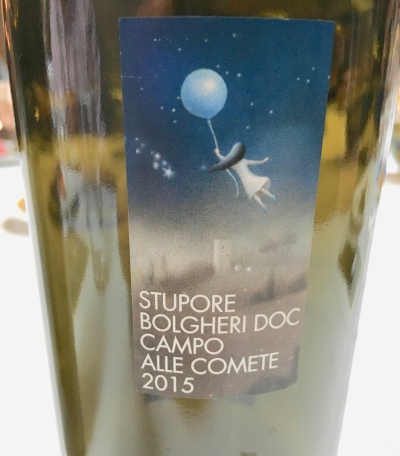 Bolgheri Rosso DOC “Stupore” 2015 made from decreasing proportions of Merlot, Cabernet Sauvignon, Syrah and Petit Verdot. Each grape variety is fermented separately, and the wine remains in contact with the skins for about three weeks. The wine is aged for about 10 months in new and used barriques and tonneaux of medium toast oak barrels. The wine has  fragrant red fruit with a touch of balsamic and eucalyptus. 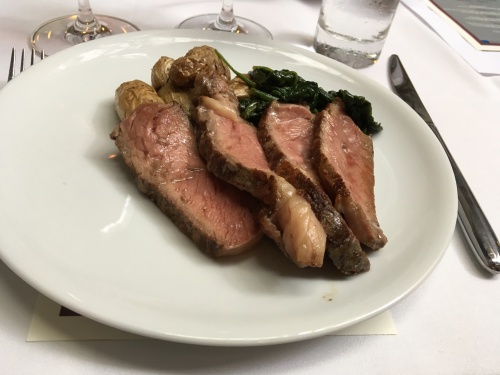 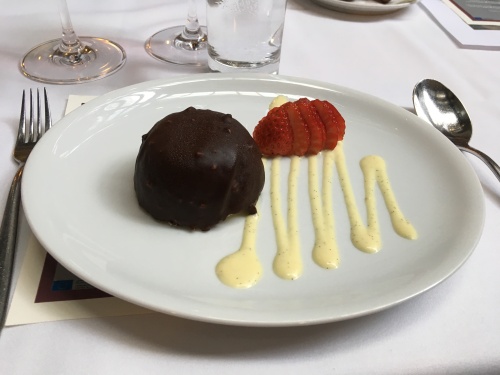 Could it be possible?  A winemaker who has been making wine in California for over 40 years but still holds on to his French roots?  These questions were soon answered when I was introduced to Bernard Portet. 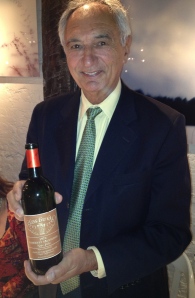 As soon as Bernard began to speak, he had me. He said that winemaking is all about place, though at some wineries, technology has replaced terroir.  He stated that wine is not as important as the food.  It is second to the food and Bernard asks his wife what’s for dinner before he chooses the wine, not the other way around.  Of course he only drinks wine with food.  Super ripe, heavily extracted wines with high alcohol are not his style. “Why make Merlots that taste like Syrahs? Where is the charm? Big, alcoholic super extracted wines overpower the palate and sacrifice varietal and regional typicity, as well as complexity.”  In an age when a lot of wine is reaching 16% alcohol his wines range between 13.5 and 14.1 percent of alcohol. 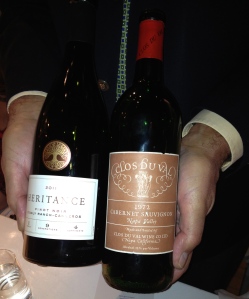 Portet’s assemblage winemaking style has become his signature. He does not own any vineyards and buys all of the grapes since he feels that he can buy the best grapes available.  He blends wines from different varieties and terroirs to create finished wines greater than the sum of their parts.  He feels that it is a style that creates unique distinctive wines.Bernard was born in Cognac and his father was a regisseur  (estate manager) at Cháteau Lafite and his mentor.  He explained that the name of the winery Heritance is derived from heritage (his family has been making wine for 9 generations) and inheritance (from his father Andre who taught him all about wine).

The Wines of Bernard Portet 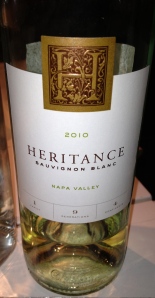 Sauvignon Blanc 2010 made from 91% Sauvignon Blanc and 9% Semillon. The Sauvignon Blanc comes from vineyards located in St Helena and the Soscol Hills south of the city of Napa. The wine is aged in stainless steel. No malolactic fermentation. Bernard said that this is more like a white Bordeaux in style. It is a subtle well-balanced wine with hints of herbs, grass, good acidity and a touch of citrus fruit. $24

Sauvignon Blanc 2011 88% Sauvignon Blanc and 12 Rousanne. The Rousanne comes from the Paso Robles area where the soil is well drained sandy-loam. The grapes were hand harvested in mid-September at an average brix of 23.0. Bernard said Rousanne was very much like Sauvignon Blanc and added that this wine was more California in style. It had more body than the 2010 with a touch of grass, citrus aromas and flavors with undertones of ripe grapefruit and tropical fruit. $24 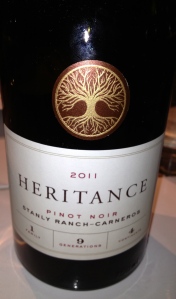 Pinot Noir 2011 Stanly Ranch, Carneros, Napa Valley. Grapes were hand harvested between July 24-August 7 at an average brix of 24.2.  The vineyard is vertically trellised with a density of 1,500 vines per hectare. The soils are mostly alluvial and sedimentary and well drained. Bernard said that Carneros with its marine-influenced climate is considered the best growing area for Pinot Noir in the Napa Valley.  The grapes were cold soaked for several days at 50 degrees F.  Fermentation took place in open top stainless steel tanks.  It is punched down twice a day and pressed after a short maceration. The wine is aged in used French oak barrels. This is a wine with aromas and flavors of red fruit, a hint of cherry and a touch of mint. $24

Cabernet Sauvignon 2010 Napa Valley. Made from 94% Cabernet, 4% Merlot, 2% Petit Verdot. The grapes come from the valley floor vineyards in the St. Helena, Rutherford, Oakville and Oak Knoll appellations. The soils are alluvial and gravelly. The vineyards have generally good drainage and although all are drip irrigated very little irrigation was needed in 2010. Because of the cool weather it was a relatively late harvest. Bernard said it was like the weather in France. The grapes were hand harvested in September at an average brix of 23.5 to 24.5
The grapes were cold soaked for a few days to enhance extraction and color and the musts were fermented at around 85 degrees F. for about 10 days. Assemblage of the small lots and varietals took place in various stages. The wines were aged for about 20 months in both new and mature, medium-toast French oak barrels. This is a round and soft wine with red fruit aromas and flavors, hints of blackberry as the wine opens up and a touch of spice. $36

Cabernet Sauvignon 2008 Napa Valley 92% Cabernet Sauvignon and 8% Merlot. Bernard said the Merlot was necessary to make the wine complete. This wine is full, round and well balanced. There are black fruit aromas and flavors, a hint of violets, and a touch of spice. $36 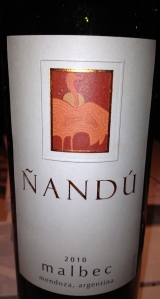 Malbec 2010 “Nandù” Mendoza, Argentina. 97% Malbec and 3% Cabernet Sauvignon for the acidity. Grapes are from the Maipu area, the vineyards are at 2,624 ft. and Luján de Cuyo area at 3,116 ft. The average vine is 18 years old with a vertical trellis system. The average yield is 5 tons per acre.
Bernard said that the area is semi-desert like with an average temperature of 60 degrees F. Average rainfall is 8% per year, mostly in the summer. The soils are a blend of clay, sand and silt, consisting of a fair amount of gravel and small stones and well drained. Due to the proximity of the Andes mountain range, the nights are fairly cool. All this makes for very good conditions allowing for an even, slow maturation of the grapes. The grapes are hand harvested between March 20 and April 10 in 880 pound bins at an average brix of 23.5. 50% of the wine is aged in stainless steel and concrete tanks and the other half in French oak barrels for 9 months. Bernard called this wine an “Argentine Malbec with a French spirit.” This is difficult to believe but it did not taste like any Malbec from Argentina that I have ever tasted before–in fact it may be the best one I ever tasted. This is a wine with aromas and flavors of plum, blueberry and later blackberry with a touch of cedar. $24 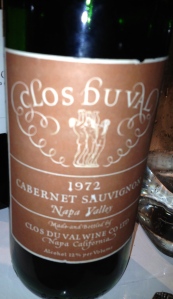 Bernard saved a gem of a wine for last.   Cabernet Sauvignon 1972 Clos du Val. Made from 80% Cabernet Sauvignon and 20% Merlot. It reminded me of an old Bordeaux when they use to make them in this style. It had red fruit aromas and flavors, more then a hint of cherry and overtones of leather. The waiter made the mistake of leaving the decanter next to me …..

Bernard is co founder of Clos du Val and was there for 40 years. 1972 was his first vintage. Mixing grapes was not done in California in those days.