Benedetto Alessandro, the oenologist of the Alessandro di Camporeale winery in Sicily, was the speaker at a tasting I attended recently of his company’s wines. 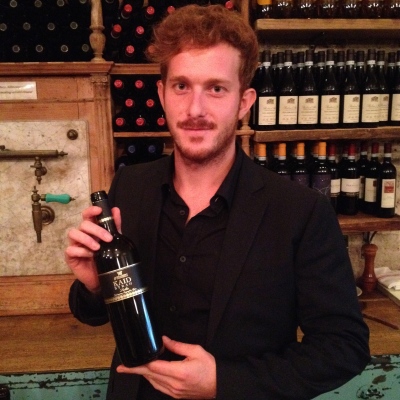 This is a fourth generation family-owned and operated winery located in the small farming town of Camporeale, close to Palermo. The estate is at the foot of a hill overlooking the Mandranove Plain. There are 35 hectares of vineyards at about 400 meters. The climate is mild and the fertile clay and limestone-based soil are ideal for producing a wide variety of different grapes. He made a point of saying that the approach in the vineyard follows the overall values of tradition, experience and knowledge of the land. All vine related activities are carried out by hand, following organic farming principles such as biodiversity to combat parasites and using green manure to promote soil fertility.

The wines of Alessandro di Camporeale

Catarratto “Benedè” DOC Sicily 2014 100% Cataratto. The vines were planted in 1990 and are at 420 to 470 meters. The soil is clay and sand, the training system is guyot and there are 3,500 plants per hectare. Harvesting is by hand starting the 10th day of September. The grapes are destemmed and cooled, then a soft pressing takes place. Fermentation is in stainless steel at a low temperature for 15 days. The wine undergoes malolactic fermentation. It is aged for 6 months in stainless steel and another 2 months in bottle before release. The wine has hints of apricot and white peach with a hint of almonds in the aftertaste. $19 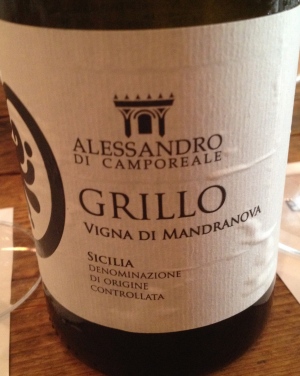 Grillo “Vigna di Mandranov” DOC Sicily 2013. 100% Grillo. The vineyard was planted in 2009. It is at 450 meters, the soil is clay, the training system is guyot espalier and there are 4,000 vines per hectare. Harvest is by hand starting in the beginning of September. After destemming, the grapes are cooled and gently pressed in an oxygen free environment. Fermentation is in stainless steel at a low temperature for 15 days. The wine is aged in stainless steel for 6 months and in bottle for 1 to 2 months before release. The wine has hints of citrus fruit with touches of flint and herbs. A very nice example of this type of wine. $29

Nero d’Avola “Donnatá” Sicily DOC 2013 100% Nero di Avola. The soil is rich in clay, limestone and potassium. The vines were planted in 2000. The vineyard is at 380 meters. The soil is clay and sand, training system is spurred cordon espalier and there are 4,400 vines per hectare. Harvest starts by hand, the first week of September. Maceration is for 12 days at a controlled temperature. The wine is aged in stainless steel and a small part in big oak casks. The wine remains in the bottle for 2 months before release. This is an aromatic wine with hints of blackberries and cherries with a very pleasing finish and aftertaste.

Benedetto said that Nero d’Avola was the most important red grape variety in Sicily. $19 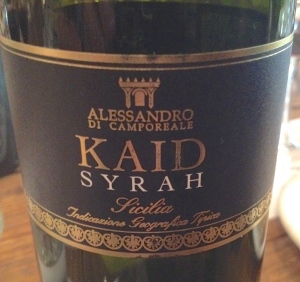 Syrah Kaid l IGT Sicily 2011 100% Syrah The soil is clay and chalk with an alkaline reaction. The vines were planted in 1989, the training is spurred cordon espalier and there are 4,400 plants per hectare. The grapes are picked by hand in the morning the first 20 days of September. Maceration is for 12 days at a controlled temperature. The wine is aged for 12 months in barriques and tonneaux and 6 months in bottle before release. This is a big wine, alcoholic with hints of cherry and black currants with a lot of vanilla, toasty oak and coconut. One of the wine writers present said that he likes the first 3 wines but this wine was out of balance and much too international in style. Benedetto agreed and said that starting with the next vintage 2012 they are using less barriques and more tonneaux and big oak casks .$25

He also said that Syrah is considered the “most Sicilian of the international grape varieties”.

Kaid “ Vendemmia Tardive” Late Harvest 2014 IGT Sicily 100% Syrah from a 1.5 hectare plot. The vineyard is at 400 meters and the vines were planted in 1989. Fermentation is for about 12 days at a low temperature. The wine is aged in Allier oak barriques for 15 months and in bottle for 6 months before release. This is a dessert wine with nice rich forward fruit with hints of cherries, black currants and a touch of chocolate. It has a very pleasing aftertaste and a very long and complex finish. $35