The Leopard at des Artistes

The Leopard at des Artistes is undoubtedly one of New York’s best and most beautiful restaurants.  But until recently it had not been open for lunch, which Michele and I usually prefer for dining out.   However, the restaurant’s schedule changed and The Leopard at des Artistes is now open daily for both lunch and dinner.  Michele found Chef Jordan Frosolone’s menu, whose cooking we had previously enjoyed when he was the chef at 10 Corso Como very appealing, so we arranged to meet a friend there.   It was a beautiful spring day and everyone was seated outside.  The scene was so perfect, it could have been a cafe on the Via Veneto.

We, however, love the inside of the restaurant where we can be surrounded by the famous murals by Howard Chandler Christy, so we asked for a table indoors and had the dining room all to ourselves.  Owner Gianfranco Sorrentino, who also is the owner of Il Gattopardo on 54th Street, stopped by to say hello. 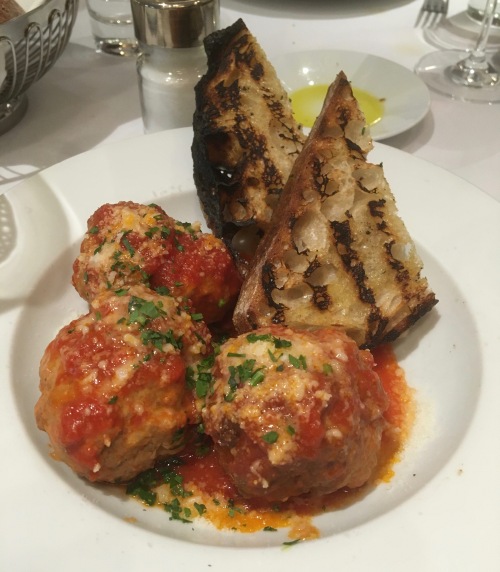 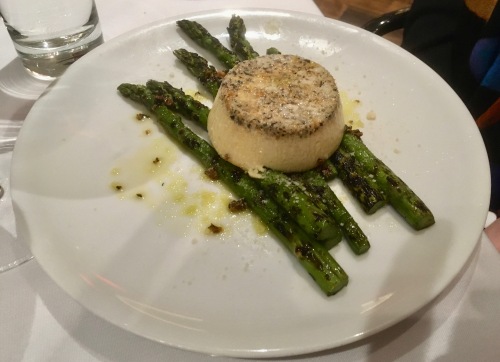 Insalata di granchino-Crabmeat, peas, croutons and Mediterranean sumac.  The flavors of spring captured on a plate.

Brunello di Montalcino 1990 Lisini made from 100% Sangiovese. The are 3,300 plants per hectare in the old vineyard and 5,400 plants in the newer vineyard at 300 to 350 meters. The grapes are hand harvested and a selection takes place. Fermentation and maceration is in stainless steel with skin contact for 20 t0 26 days. Aging is in large Slavonian oak barrels of 20 to 50 ha for 42 months. The wine is aged another 6 to 8 months in bottle before release. This is a traditional Brunello with hints of red and black fruit, blueberries and rasperries and a touch of violet. It was drinking extremely well.

Rosso di Torgiano DOC 1985 Lungarotti 70% Sangiovese and 30% Canaiolo. The soil is clay and sand of medium depth with limestone subsoil. There are 4,000 vines per hectare and the harvest takes place in September/October. Fermentation takes place in stainless steel tanks with 18 days maceration on the skins. It is aged for 12 months in oak casks and lightly filtered before bottling. This is a wine with red fruit aromas and flavors, hints of black cherry and a touch of leather and spice with a very pleasant finish and aftertaste. 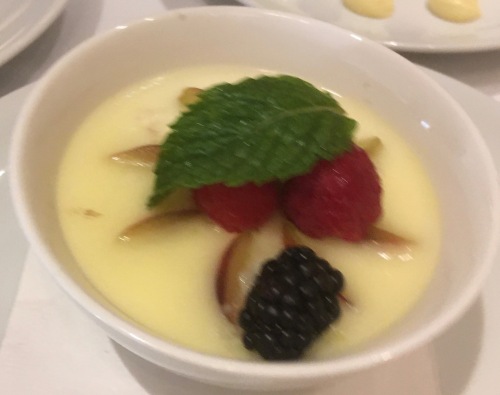 Chocolate Mousse with Berries and Cream 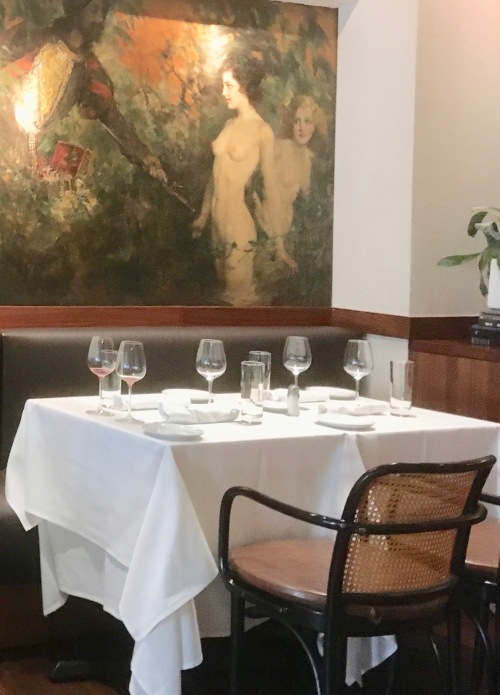 The Leopard at des Artistes

From Rome to Williamsburg, Brooklyn

When in Rome last June, Michele and I enjoyed lunch at Pier Luigi, a favorite restaurant for fish.  After our meal, we got into a conversation with Lorenzo Lisi, an owner, who said that he and his partners were going to open a restaurant in Williamsburg, Brooklyn, which they found similar to the Trastevere neighborhood in Rome.  The new place would be a version of Antica Pesa, one of the oldest restaurants in Rome, known for its classic Roman cooking.

I love the food in all 20 regions of Italy, but as I have often said, if I were a rich man I would live in Rome.  One of the main reasons is the food.

Williamsburg seems like a big trip across the river, but in reality, it took us less than a half hour to get to Antica Pesa from our Manhattan apartment.  When we entered Lorenzo Panella, the general manager, greeted us.  Since it was a cold night, he graciously seated us in front of the fireplace until our other guests arrived

At the table, we ordered the tasting menu.  The highlights included perfectly fried calamari, marinated skate with sauteed escarole, linguine cacio and pepe, schiaffoni all’ amatriciana (a pasta resembling rigatoni, though I would have preferred it with bucatini) and a very tasty lamb crop.

We brought our own wines and the corkage fee here is $25 per bottle.  The beverage director, Gabriele Guidoni, is a true sommelier and before long we were having a discussion about Italian wine.

Langhe Bianco Nascetta- Anas- Cetta DOC 2010 Elvio Cogno.
Made from the Nascetta grape (autochthonous Novello Bianco). This grape is of Mediterranean origin and might have originated in Sardinia. Cogno first produced the wine in 1994 and there are records of it going back to the 19th Century.  He is one of the few that make it now.  The Nascetta vineyards are at 350 meters and the 4,000 vines per hectare are vertical trellised with Guyot pruning. Harvesting is at the end of September. The wine is vinified in 70% stainless steel and 30% in barriques. It is aged 6 months in stainless steel and 6 months in barriques and is 180 days on the lees. After 3 months of bottle age it is released.
I visited this winery a few years ago and Valter Fissore,  Elvio Cogno’s son-in law and the wine maker, said that it has a mineral character but when it ages, it resembles Riesling! It is a very elegant wine with good fruit, a long finish and great aftertaste.

Trebbiano d’Abruzzo 100% DOC 2005, Edoardo Valentini.  The winery is organic and biodynamic. This is a very complex and full bodied wine with a mineral character, hints of citrus fruit and apple, good acidity, great finish and aftertaste and an extra something that is difficult to describe.
The wine is aged in large botti of Slavonia oak for 24 months. I do not like to compare types of wine, but if asked what other type of wine this reminded me of, my answer would be a great white burgundy.
In one of her books, Jancis Robinson says that the grape for this wine is not Trebbiano d’Abruzzo but Bombino Bianco. When this question came up when I was at the winery, Edoardo Valentini said that the grape was a special clone of Trebbiano d’ Abruzzo. Both the importer and Edoardo’s son, Francesco say it is Trebbiano d’ Abruzzo. 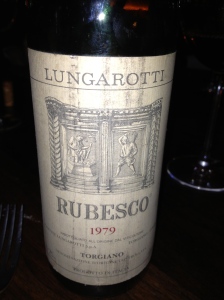 Rubesco Rosso di Torgiano DOC 1979 Lungarotti 70% Sangiovese and 30% Canaiolo. The soil is clay and sand of medium depth with limestone subsoil. There are 4,000 vines per hectare and the harvest takes place in September/October. Fermentation takes place in stainless steel tanks with 18 days maceration on the skins. It is aged for 12 months in oak casks and lightly filtered before bottling. This is a wine with red fruit aromas and flavors, hints of black cherry and a touch of leather and spice with a very pleasant finish and aftertaste, Note: this was NOT the Vigna Monticchio but the regular Rubesco which made it even more impressive!

Barbaresco Campo Cros Martinenga 1982, 100 % Nebbiolo Tenuta Cisa Aisnari dei Marchesi di Gresey.
In his book the Italy’s Noble Red Wines Wasserman describes the wine as: “Tobacco and cherries on aroma; full of flavor, extremely well balanced; long finish the best Martinegna to date.” This is his note from 1985; I tasted the wine with him a few years later and was very impressed. 30 years later his description still stands and  the wine is at its peak. Wasserman also says that the 1982 was almost perfect and gives the vintage four stars, his highest rating. He gives the wine three stars with a possible four. After drinking it with dinner I give it the extra star, too.

Amarone 1961 Bertani 70% Corvina Veronese, 30% Rondinella-this is the present blend.
Carefully selected grape bunches are hand-harvested in Bertani’s best Valpolicella vineyards in Fumane, Marano and the Novare Valley. Vines are cultivated using the “spalliera” method while pruning is done using the Guyot  method with 5.000 vines/ha.
Unlike most leading Amarone producers, who buy grapes from outside growers, Bertani’s harvest originates entirely in the firm’s own vineyards. With marly-calcareous soil sheltered by surrounding woodland, these vineyards offer the ideal terroir for Amarone.
Harvest begins in early October and extends over a two-week period. After harvest, ripe, unblemished grapes from the uppermost portions of each cluster — those grapes richest in sugar and extracts — are painstakingly detached and laid out to dry on cane mats. The mats are stored on raised platforms in airy lofts, sheltered by a roof but otherwise exposed to drying breezes on all sides. By the time they are ready to undergo maceration and fermentation in February, they will have lost up to 60% of their water content (appassimento). A lengthy maceration period ensues, a factor responsible for Amarone’s tremendous body and structure. After a controlled fermentation, the wine is transferred into oak casks for a period of 5-8 years (the 1961, I believe, spent a longer time in wood) during which it was racked twice annually prior to bottling.
Dry, full-bodied, and amply structured with hints of cherries, red berries and spice.  The wine was showing its age. 1961 was a very good vintage for Amarone.