Eating and Drinking in Paris

There is something about Paris that makes it special, even in the snow. Our flight landed at 8:20 AM the day after the snowstorm and we did not leave the airport until 11:00 AM. Turns out they were unprepared for snow. The taxi driver got lost trying to find the hotel, not because of the snow but because he did not his way around Paris. By the time we got to the hotel we were tired and cold and the streets were full of slush and ice. 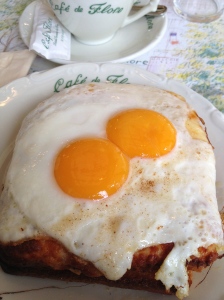 But it was Paris, so we made our way to Café de Flore, 26 rue Benoit/Sain Germain-Des-Pres. I had the La Jockey (Croque Madame) and Michele had quiche.  This is a very popular place both with the French and tourists and there are so many interesting people to watch.

By the next day the snow was gone and we went for a walk toward Les Halles. We passed a small restaurant that resembled an old Parisian Bistro and I looked in the window. The décor was old fashioned and kind of shabby and the menu on the chalkboard outside looked great, plus it was inexpensive. We kept it in mind and a few days later we went for lunch. Le Gros Minet 1Rue Prouvaires (+33 1 42 33) is a family run restaurant.  The food is simple in the style of Southwest France but very good and the bread is excellent. The staff is friendly and the service is attentive. There is a choice of house wines. I ordered a Cote Du Rhone and I could not believe how good it was, though I never did find out the name!  I had kidneys in a mustard sauce and Michele had a salad with foie gras.

When the taxi arrived at Taillevent, 15 rue Lamennais (www.taillevent.com), two men opened the doors and  escorted us into the restaurant. Inside there was a gracious welcome.  We were escorted to a very comfortable table and settled in with a glass of champagne. I do not have any pictures because one does not take pictures at Taillevent! The food was excellent as was the wine and the service.  The menu at lunch changes every two weeks, so I will not write about what we ate. But for dessert it was Paris Brest, basically a cream puff pastry with hazelnut filling.  It was so delicious. The meal ended with a glass of Armagnac.  The meal was expensive but I have paid more in restaurants in NYC that were not as good.  This was a very special experience.

One chilly and rainy night we made our way to Restaurant Chez Paul at 13 rue de Charonne.(+33 1 47 00 34 57). This is a traditional Bistro, very cozy and very crowded. Michele had made a reservation on line but when we got there the gentleman at the desk said they did not have the reservation. After a few awkward moments, he smiled and seated us at a table close to the bar. From now on we will always confirm our reservation that we make on line by phone when we arrive in Paris. I had an excellent confit of duck with apples and garlic and Michele had Steak au Poivre. For dessert Dèlicieuse poire au vin èpice et vanillè. It was, as it name says, delicious and it is the house specialty.

We drank the Domaine Milan Les Baux de Provence Clos Milan Rouge 2005 made from 75% Grenache, 20% Shiraz (Syrah) and 5% Cabernet Sauvignon. The grapes come from vines that are at least 40 years old that grow in quaternary sands and gravels. The grapes are destemmed and fermented in cement tanks for about three weeks and then aged in old barriques for a further 12 months.

La Regalade now has two locations. The original at– 49 Jean Moulin and the other at 123 Rue Saint Honore (+33 1 42 21 92 40).   Both locations start you off with a large terrine of pate de campagne and a crock of cornichons with bread that is toasted and crunchy. It is almost a meal in itself and delicious.

The first night we went to the one on Rue Saint Honore because it was close to the hotel. The food was good but the pigeon I ordered was covered with FOAM. This was completely unnecessary, did not add anything to the dish, in fact it distracted from it. We had a nice bottle of Cahors 2009 Château du Cadre.Made from 90% Malbec, 5% Merlot and 5% Tannat Fermentation is between 30 and 35 days with with pumping down at the beginning of fermentation. Malolactic fermentation takes place in barrels. Aging for 22 months in oak barrels (Troncais) of different ages. The wine is not filtered.  It has black fruit aromas and flavors and a hint of spice.

We went to the original La Regalade a few nights later with a French friend who lives in NYC but is working in Paris for the next six months. We went by Metro and she carried her dog in a cloth basket on the train and brought it  into the restaurant. The dog was very well behaved and was given some water by the waitress. The food was good but again the FOAM, this time on my pork.

Egg on a Bed of Asparagus

Michele had a perfectly cooked egg on a bed of asparagus topped with a thin slice of cheese wich she really liked. 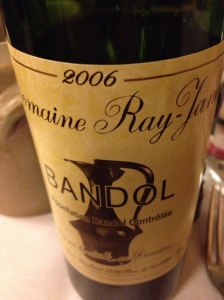 We drank a bottle of Bandol 2006 Domaine Ray-Jane.  I believe the principal grape is Mourevdre and it went very well with the food.

We stayed at the Hotel Molière, 21 Rue Molière(+33 1 42 96 22 01) on the right bank. This is a quiet family run establishment with very nice rooms. The highlight however was the bathroom; it had a large walk in shower, a big bathtub, a long trough-like sink and more light than any bathroom I have ever been in before. The hotel was in a good location because it was in walking distance of many of our favorite restaurants.

Michele really enjoys the atmosphere of this classic Parisian bistro.  Usually we order the same dishes each time we go but this time we ordered foie gras to start instead of the Salade Frisee aux Lardons we usually get.  Once again we ordered calf’s liver al anglaise fried in butter with a big thick slab of bacon on top, and frites. Since it was our last night we added a cheese course. For dessert, as usual we ordered the Tarte Tartin, an upside down apple tart accompanied by a large bowl of extra thick crème fraiche.

Crozes- Hermitage 2010Domaine Saint-Clair 100% Syrah. This was a lovely red wine that went very well with the food.

L’Ardoise 28 Rue due Mont Thabor (+33 I 42 96 28 18) We had a very nice meal here but the food came out too quickly and the place is small and cramped. The most memorable dishes were the desserts, a chestnut soufflé and a lemon meringue tartlet. 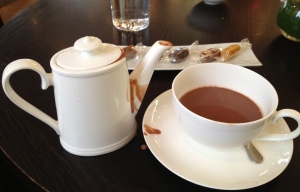 Jaques Genin 133 Rue Turenne.   It was cold in Paris and what better way to spend part of the afternoon than in a beautiful place enjoying a hot chocolate. We drank hot chocolate and munched on bite sized chocolates and caramels. The caramels are expensive but well worth it-they are indescribably delicious!